One Theater Square: The right project at the right time

With the New Jersey Performing Arts Center as a backdrop, Carl Dranoff stood at a podium and heaped praise on his colleagues as he went down the list of well-deserved thank yous.

After about five minutes had passed, he said it was time “to take a moment to talk about what we are actually building” with the residential high-rise known as One Theater Square.

He started with its location in downtown Newark. 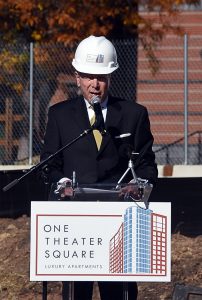 “Look around you. Look at the neighborhood,” Dranoff, founder and CEO of Dranoff Properties, told a crowd of dignitaries on Monday. “Everything is within walking distance of One Theater Square.”

Such is the promise of a project that took nearly a decade to materialize, and the nearby amenities have only grown since the development was first conceived — a rehabilitated Military Park, a new Whole Foods and gleaming new office towers for the city’s corporate anchors, among others.

It’s why stakeholders can now celebrate a project that is not only a long time coming, but coming at perhaps the perfect time for Newark.

“We think it’s a renaissance city,” Dranoff said. “It’s going to benefit from the back-to-the-city movement because of all of the amenities that are going in downtown, and it’s sort of got the critical mass that it didn’t have five years ago, so maybe the delay was fortuitous.”

With construction crews already working at the site, NJPAC and Dranoff Properties hosted a ceremonial groundbreaking for the $116 million, mixed-use project on Center Street. With 245 apartments and 12,000 square feet of retail space, the 22-story glass and brick tower is expected to be complete by 2018, advancing a mission that actually dates back more than 20 years.

RELATED: In Newark, a feel-good moment decades in the making

Larry Goldman, the venue’s founding CEO, said the earliest visions of NJPAC called for it to be far more than performance spaces and a restaurant. It was instead meant to be “a transformative agent for this proud city.”

“Part of the idea was for the arts center to capture its externalities, as the economists would say, to grab some of that value that it was bringing to the area to help support the arts center,” Goldman said. “But there was a bigger idea and the bigger idea was urban transformation.”

That led to the Theater Square concept for the parcels around the facility, which gained momentum around 2005, seven years after the venue opened its doors. But the plan was stalled by the real estate crash and skepticism about whether Newark was ready for such a project.

The passage of time has brought both a recovery and a booming market for high-end apartments in urban locales. The breakthrough came in mid-September, when the development team assembled a capital stack that included a grant from the city and a $33 million state tax credit, along with financing from Prudential Financial, Fifth Third Bank, Dranoff and NJPAC.

Speakers on Monday credited John Schreiber, NJPAC’s current CEO and president, with getting the plan to the finish line. Schreiber, in turn, offered praise to the team of government officials, business leaders and philanthropists who have supported the project through the toughest of times.

“You always provided your wisdom, you invested your heart and your financial resources and — most significantly — you stuck with us when the easy course might have been to step away,” Schreiber said. “Today is a remarkable story of resilience, of faith, creativity and collaboration. 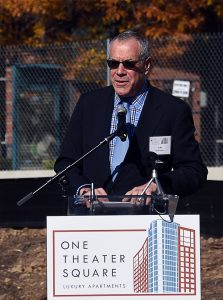 “By making this deal happen, you make possible the next historic chapter in the forward motion of the city that we all love so much.”

Dranoff, a Philadelphia-based developer, said the rents at One Theater Square are “going to draw people like a beehive because we’re going to be one-third below pricing for similar product in Jersey City and Hoboken.” And he said it will offer better value per square foot than those locations.

He also said his firm sees enough potential in Newark to consider other projects in the city. He’s focused on One Theater Square for now, he said, but breaking ground on the long-awaited project is an important first step toward finding other opportunities.

“From the beginning we’ve always felt that we could do more than one project in Newark,” Dranoff said. “We’re totally focused on this one right now, but our blinders are off and we’re looking at other possibilities.”

By the numbers: One Theater Square