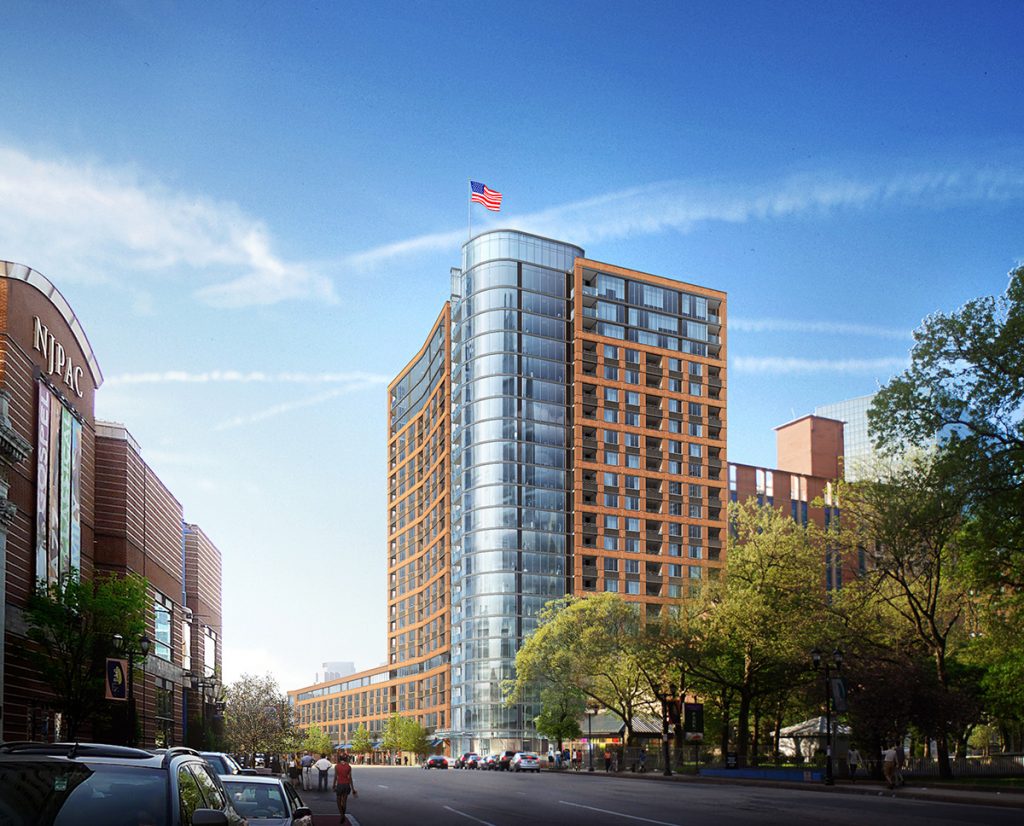 NEWARK — The long-awaited 22-story One Theater Square apartment tower in Newark across the street from the New Jersey Performing Arts Center is rising steadily and on schedule for completion next year, officials said.

Since breaking ground in November, the $116 million project with 245 rental units has climbed above the adjacent 12-story Robert Treat Hotel, its nearest neighbor on Park Place in city’s the Military Park Commons Historic District.

The One Theater Square tower fulfills a requirement by the state that housing be developed in the area surrounding NJPAC, though it’s now 20 years since completion of the performing arts center.

It took 12 years after NJPAC’s completion for the city to designate a developer, Philadelphia-based Dranoff Properties, after declaring the 1.2-acre site an area in need or redevelopment.

It was another eight years for market conditions to be favorable enough for construction to start last fall. In the meantime, the size of the project was scaled back from a 44-story tower.

The project is owned by subsidiary of NJPAC known as Theater Square Development Company. NJPAC CEO John Schreiber said in a recent interview that the project was on schedule for completion in the summer or fall of 2018.

Schreiber led a recent tour of the construction site, including a trip to the top providing a preview of one of the building’s main attractions: panoramic views of the New York and Jersey City skylines.

The building has not begun pre-leasing, but Schreiber said he gets calls or informal inquiries almost daily expressing interest in the project.

Improving market forces alone were not enough to finally get One Theater Square moving. The project is receiving $33 million in Urban Transit Hub tax credits from the state Economic Development Authority, and an $11 million loan from the City of Newark.

In return, the building will include 26 apartments set aside for people of low and moderate incomes.

The set-aside is consistent with the City Council and Mayor Ras Baraka’s goal of insuring that Newark’s recent development boom does not exclude city residents, as gentrification has done in other cities.

However, the proportion of affordable units at One Theater Square is much lower than the 20-percent requirement under an amendment to the city’s land use law that the council is scheduled to vote on for final adoption July 12.