Dranoff’s One Theater Square MF Development Topped Off In Newark 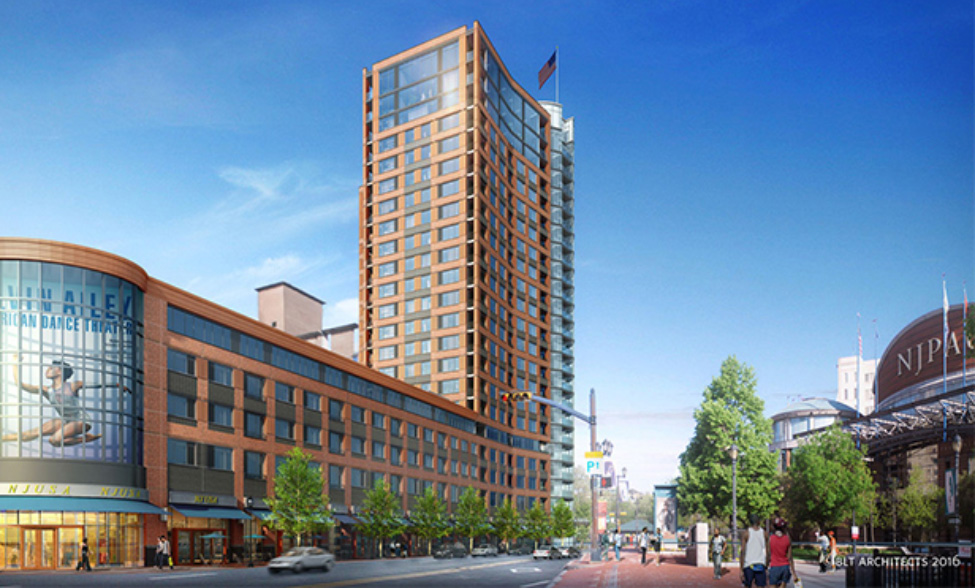 The new building, located across the street from the New Jersey Performing Arts Center, is part of a planned development sponsored by NJPAC to develop the properties surrounding the entertainment venue with residential and commercial properties to redefine the streetscape of downtown Newark.

One Theater Square, located on a 1.2-acre site, is 22 stories tall and will encompass 268,500 square feet upon completion. The residential tower, clad in curved glass and thin brick clad precast panels to complement the NJPAC building across the street, will offer views of the New York and Jersey City skylines from 245 studio, one, two, and three-bedroom units. Twenty-four of the units are designated as affordable housing. Amenities include a fitness center, lap pool, community rooms, and an outdoor deck.

The building will also feature 12,000 square feet of ground floor retail space and an adjacent 111,500 square-foot parking structure that can accommodate 285 cars.

As previously reported by GlobeSt.com, developer Carl Dranoff described the location as near perfect for a development of this type.

“It’s a carefully calculated risk,” Dranoff said a year ago. “It’s just a bullseye location, you just can’t get a better location.”

“The Harman Group’s extensive experience designing and building innovative urban projects enabled us to design a structure that can not only accommodate future One Theater Squareresidents, but also those patrons that will be visiting the space,” says Albert Meyer, senior project engineer at The Harman Group. “One Theater Square will provide much-needed housing that is crucial to the urban revitalization of downtown Newark.”

The Harman Group provided structural engineering and parking planning and design services on the project, which is being developed by a public-private partnership between NJPAC and Dranoff Properties and designed by BLT Architects.

Additional contributions were provided by the State of New Jersey, the City of Newark, Prudential Financial and Fifth Third Bank.

One Theater Square will be the first upscale high rise built in Newark in almost 60 years. The project broke ground on November 14, 2016 and in February of 2017 was honored by New Jersey’s Alliance for Action as a project that will have a transformational impact on New Jersey’s economy, job creation and quality of life.

One Theater Square is slated to open in Summer of 2018.

← Newark’s building boom an echo of its history : Di Ionno
Industrial Buildings Are Not A Long – Term Answer For Philly’s Multifamily Market →