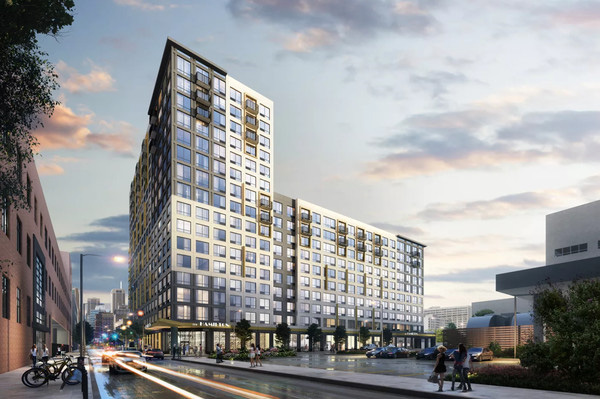 The proof is in the cranes: Construction in Center City continues to boom, with developable land very few and far between the many new towers piercing the sky.

Yet not all of the high-rise projects currently under construction are starting from scratch. A number of developments are making use of already existing structures, putting overbuilds on top of them. Essentially, buildings are being built on top of buildings.

There’s 2400 Market on the Schuylkill River, for example, which is tacking on an extra four glassy stories to the old Marketplace Design Center for Aramark’s new headquarters. In Rittenhouse, there’s another overbuild under construction, perching on top of a historic Frank Furness-designed brownstone at 2108 Walnut. And in Logan Square, the Philadelphia Community College is building a 10-story apartment tower on top of an old parking garage.

There’s even a smaller overbuild movement happening among Philly’s classic rowhomes, with owners tacking on third stories to their squat two-story houses.

“We have in Philadelphia a plethora of buildings built in the 1920s, and many of them have a significant capacity to put additional floors on,” says Janis Vacca, a structural engineer and partner at the Harman Group who is working on at least three overbuild projects in Center City alone.

But why build higher than just build new?

Some of the pros of overbuilds are obvious and beneficial for multiple groups, from developers to historic preservationists. On the developer’s side, the monetary savings can’t be beat. That’s what attracted David Yeager of Radnor Property Group to the PCC project, which will make use of an parking garage at 15th and Hamilton and build 10 stories on top of it.

“The infrastructure was there, so it saved us costs for not having to do additional demolition,” Yeager says. “It also enabled us to not have to undertake excavation costs. It was a very cost-effective way to utilize an existing facility for our ultimate benefit.”

Yeager estimates that the overbuild will allow the 279 rentals to be priced between 10 to 15 percent lower than a typical market-rate apartment.

There’s also the fact that overbuilds allow many of Philly’s older and historic buildings to be saved from the wrecking ball. Take the Furness brownstone at 2018 Walnut, for example, which is one of the architect’s oldest remaining works in the city. The brownstone was structurally sound enough to allow Cecil Baker+Partners to design a five-story glass addition on top of it, set back from the street. The designers also worked with the Historical Commission to preserve the carriage house behind the brownstone and incorporate it into the condo project.

“What this affords us as designers is it puts us at position and context in which we can be more creative,” says Eric Leighton, the lead architect on the Furness project and partner at Cecil Baker + Partners. “The context drives the design. It really results in solutions that you might not come to with a building from ground up.”

That includes features like large terraces or balconies that aren’t always accommodated in completely new constructions, says Leighton. “Philadelphia is historically not a balcony city like other cities, but overbuilds allow for bigger outdoor terraces because of the way we’re approaching the setbacks of the building.”

Still, not every old building in Philly can handle growing in height this way. Some may not be structually sound, while others were not ever meant to be repurposed into residential or office space, says Vacca. She reasons, “For every 10 buildings I look at, only one of them is usually qualified to do an overbuild.”

And at least for the time being, major overbuild projects are also limited to the core of the city, where development is booming. Return on investment has a lot to do with that, says Vacca, and means that overbuild treatment may not make financial sense or even be necessary in outlying neighborhoods, where there is more developable vacant land where projects can be built from the ground up.

But Leighton says we shouldn’t expect Philly’s neighborhoods to end up with an entire block of overbuilds anytime soon, especially involving historic properties.

“I think the jury may still be out on how we get the approvals for them, and the Historical Commission will have a big participation in that,” says Leighton. “It’s definitely new territory.”