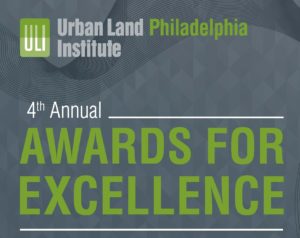 Criteria for the awards include factors beyond innovation in planning and design, including adaptability to other communities, sustainability, economic success, overall community health and social impact to address neighborhood revitalization goals.

The 14 selected finalists represent a wide variety of project types, including adaptive reuse, commercial, residential, institutional, mixed use open spaces. An independent and national panel of jurors, including leaders in real estate, land use and development from across the country, were tasked with selecting the highest quality projects.

The finalists are (listed alphabetically):

The awards will honor the legacy of the late business and civic leader Bill Rouse, one of the founders of ULI Philadelphia and a past Trustee of the Urban Land Institute.  Rouse created and led Liberty Property Trust and its predecessor Rouse & Associates as a unique and visionary developer, kicking off a return to urban development with the Philadelphia Stock Exchange Building, the Society Hill Sheraton and a generation of new skyscrapers and a modern skyline starting with Liberty Place and the redevelopment of The Navy Yard.  As a tough-minded civic leader, his achievements included We the People, the Pennsylvania Convention Center, and the Kimmel Center.

Winners will be announced at a cocktail reception on June 14th at The Ballroom at The Ben, located at 9th and Chestnut Street, Philadelphia, PA 19107. To register visit click here. To inquire about sponsorship opportunities contact [email protected].